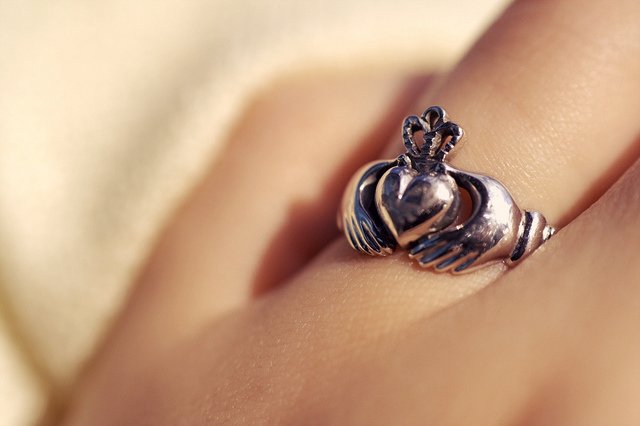 The Claddagh Ring History reveals the story of one of Ireland’s most famous Gaelic and Celtic symbols. The Claddagh ring is popular right around the world and has been worn proudly by celebrities, musicians and politicians. It has been seen on the fingers of Jennifer Aniston, Grace Kelly, Jim Morrison, Walt Disney and even Kim Kardashian!

The Claddagh Ring  takes its name from Claddagh, which was a small village just outside the walls of Galway city. The meaning of Claddagh itself is “stony shore.” Nowadays, Claddagh is very much a part of the city, in the Spanish Arch area, and sits on Galway Bay and along the River Corrib. 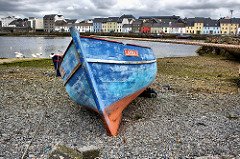 The Claddagh ring is distinctive showing two hands holding a heart with a  crown on top.

The history of the Claddagh ring is linked back to other rings showing hands joining together, found in other parts of Europe and dating  as far back to Roman times.

The idea of joining hands is generally connected to the making of a solemn promise or vow. However, the Claddagh ring is a variation of these rings as it includes the heart and the crown.

The Claddagh ring as we now know it can be traced back at least 300 years.The oldest examples of  the ring are from the 17th Century and were made  in Galway by Bartholomew Fallon, a jewellery maker and goldsmith.

The Claddagh ring history and fame developed over the years and gradually became more known outside of Galway and indeed Ireland in the last century. Its growth in popularity was helped in 1849  when Queen Victoria wore the ring after visiting Kerry in the south-west of Ireland.

Well, as you might imagine, the heart  signifies love but it is the crown which represents loyalty or fidelity, while the joining hands signify friendship. The meaning of the Claddagh ring is very much associated with friendship and the words “Let love and friendship reign” are often quoted when referring to it.

The village of Claddagh had its own king at one point and traded with Spain. It was also  reputed to have its own king as the following Claddagh legend will attest.

“The Claddagh people were a clan outside the walls of Galway and they had a law of their own. They elected a king from among themselves and it was this man's duty to act as a judge to the people. and to settle their disputes. When this king was getting married he wore the Claddagh Ring and when he died he left it to the next king.” (Source: Dúchas)

In recent years, the Claddagh ring is often combined with other celtic symbols such as the celtic knot (link) and other embellishments but this has only happened in the last few decades. As well as expressing people’s love, people see the ring as a way also of expressing their Irish or Celtic heritage and identity.

How to wear a Claddagh Ring

There are four basic meanings depending on how the ring is worn:

That said, I always imagine a poor unfortunate in a bar trying to read the signals from the subject of his interest when he spots the Claddagh ring on a finger. While it should be simple, after a few drinks, remembering the rules of how the ring should be worn seems to become a lot more complicated. Is it on the left hand or the right hand? Is the heart pointing in or out? What if they just wear it on that hand because their knuckles are swollen on the other hand? And what if the wearer just doesn’t know how it should be worn? I wouldn’t therefore recommend overrelying on the above guidance, however quaint it may seem! That said,  the Claddagh ring can be a good conversation opener. Now that you know a little of the claddagh ring history, you will sound very well informed.

Having learnt a little of the Claddagh Ring History, you might like to know about some others such as the ones below.

There is no more famous a Gaelic symbol than the shamrock. Learn about the legend associated with it on our Shamrock Symbol page.

Discover the reason behind for the ring on the Irish Celtic Cross by clicking on the link.

Find out about those tall thin Irish Round Towers.