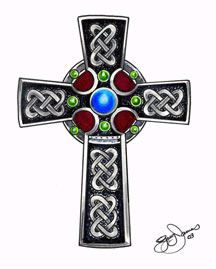 The Celtic Cross meaning as a Gaelic symbol is worth exploring. There are hundreds of examples still in existence. Sometimes known as a Celtic sun cross, there are also thousands of memorials in the form of a Celtic cross headstone to be seen in many cemeteries around the world.

It is important to learn that there are differences when talking about Celtic High Crosses and the Celtic Memorial Crosses you see in many cemeteries or other locations.

But what is a Celtic Cross?

The basic Celtic Cross is a symbol comprising a conventional cross with a ring around the intersection of the stem and the arms (as per the more elaborate example above). While these crosses are associated with all Celts, their origin is in Gaelic Ireland and they were probably introduced to Scotland, Wales and parts of England by Irish Christian missionaries. I say probably because despite what you may read elsewhere, nobody can say with certainty.

What does the ring on the Celtic cross mean? 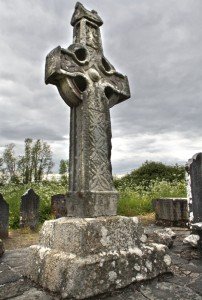 That's an even harder question to answer and very much disputed. Some believe that the ring on the Celtic cross means the Roman sun-god Invictus. As a result many people often refer to the the cross as a Celtic Sun Cross.

A more Christian theory is that the ring is a halo and that the cross represents Jesus Christ. It is also thought that the Christian monks combined the sun-god idea with the christian cross to broaden the appeal to Irish pagans.

However, I am going with the less elaborate but more practical and plausible idea that the craftsmen who shaped and sculpted stone to make celtic crosses were just trying to find a solution to the problem of the vulnerability of crosses to breaking. The ring simply makes the crosses much sturdier and better able to resist harsh weather.

What are the Celtic or Irish High Crosses?

These are a version of a Celtic cross but the stem is longer. They are particularly associated with Christian Ireland and probably originated in Ireland around the 8th Century, a few centuries after the arrival of St. Patrick. These represent Ireland's biggest contribution to European Art in the Middle Ages.

The Irish High Crosses were usually erected to mark a holy or religious place such as a monastery or church. Outdoor religious ceremonies were also likely to have been celebrated around or near these crosses. Though the High Crosses which have lasted are of stone, the earliest ones were of metal or wood.

Sometimes Irish High Crosses were erected to mark other important non-religious places such as a market, or in memory of someone famous or important. Initially the crosses were simpler and did not sport the elaborate and intricate designs we most often associate with many Celtic Crosses.

The majority of High Crosses were built in the 9th and 10th Century with early examples in County Kilkenny and Co Tipperary, one of the more famous ones being at the monastery of Clonmacnoise in County Offaly (Ireland).

Irish High crosses were no longer popular by the end of the 12th Century.

When we talk about Celtic or Irish High Crosses there are three design types: ancient Iron Age Celtic culture based crosses, scripture based or bible based crosses or a combination of these two (only a few of these in existence). 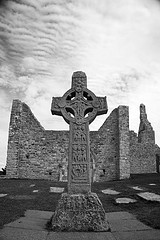 Of the scripture based crosses, the one known as 'Cross of the Scriptures' or 'King Flann's Cross' at the monastery at Clonmacnaoise, County Offaly (Ireland) is the most famous. Now housed in the town's Interpretive Centre to protect it from the weather, a replica stands in its original location. The cross is beautifully decorated with the Last Supper, the arrest of Jesus Christ, the Crucifixion and the Guarding of the Tomb among other scenes.

These Irish High Crosses were a religious education tool and many were painted in bright colors to attract people's attention. The paint has long since faded.

There is a good example of a Celtic High Cross which combines both celtic culture and scripture at Castledermot, County Kildare (Ireland).

While anything less than 850 years old could not be considered a true Irish High Cross, there are many memorial crosses built in high cross style, in cemeteries and other locations.

Around the period of the Gaelic Revival in the 1850's, memorial High crosses became fashionable as headstones or monuments. They can be seen in many cemeteries in Ireland and there are many now around the world. However, the reason these cannot be considered true High crosses is because they mark the resting place of an individual and do not essentially denote a sacred location or exist to spread the Christian message. Nonetheless, they still honor the High Cross heritage.

Take a look at a great gallery of Celtic Cross images, pictures and patterns.

But there are many other important Gaelic symbols. Check out the following.

Those tall thin Irish Round Towers