The Gaelic Revival - Past and Present

We use the term gaelic revival most often to refer to the period at the end of the 1800’s when there was a real attempt to give renewed life to Gaelic culture, Gaelic sport and the Gaelic (Irish) language in Ireland.

While there had been attempts in the 1840’s by a group called the Young Irelanders to preserve Irish stories and legends as a way of preserving an Irish identity, the growth in use of English threatened the Gaelic language. Many ordinary Irish people associated Gaelic with poverty and English was the language of the ruling class. Therefore the desire to learn English and the fact that the use of Gaelic was forbidden in schools meant the language went into decline.

The establishment of the Gaelic League 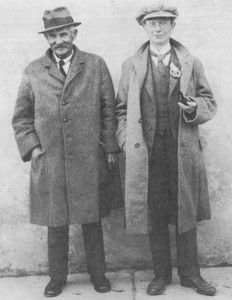 In 1893, Douglas Hyde (later to become the first President of the independent Irish State) and Eoin Mac Neill established the Gaelic League (Conradh na Gaeilge). The aim of the gaelic revival movement spearheaded by the League was to give a sense of Irishness back to the people. It wanted to fight against the erosion of the Irish culture, language and traditional Irish sports. The League also wanted to reintroduce the language back into schools.

Although Hyde wanted the League to remain apolitical, the organization attracted many nationalists. Most of the signatories of the 1916 Proclamation, Ireland’s declaration of Independence during the 1916 rebellion, were members. Indeed, Patrick Pearse, its most well-known leader was the editor of the Gaelic League’s newspaper An Claidheamh Soluis (The Sword of Light).

Douglas Hyde, a founder of the Gaelic League, was a Celtic Scholar and cultural nationalist who later became the first president of Ireland. He was born in Frenchpark, Co Roscommon in 1860 and was the son of a protestant clergyman. While Gaelic was spoken by less than 25% of the population at that time, he learned the language from the people around him and had a fascination for the native culture, and became strongly nationalist. He attended Trinity College, Dublin and was a great student of several languages including German, English and French. He became instrumental to the Gaelic Revival movement. He has been described as "the most Roman Catholic of Protestants, or put the other way around, the most Protestant of Roman Catholics."

The Revival of Gaelic Sports 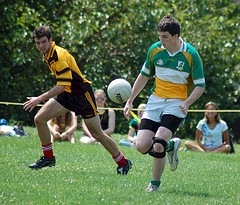 In 1884 the Gaelic Athletic Association (GAA) was established to promote the native sports of hurling and Gaelic football (See also traditional Irish sports). At that time soccer, rugby and cricket were making inroads to Irish sporting life. The native style of football and hurling were in decline. The GAA produced a playing code and rules for the native games. Thanks to the efforts of prominent members such as Michael Cusack, John Wyse Power and Maurice Davin, the decline was halted and the games became the most popular sports in Ireland. The GAA as an organization became a powerful influence on rural communities and exerted an influencethat continues today. (See also Traditional Irish Sports)

The Gaelic League and Irish Independence

The power of the Gaelic League grew until Irish Independence in 1922. Both the League and the GAA became increasingly political, heavily influenced by the Irish Republican Brotherhood. In 1905 Arthur Griffith established Sinn Féin, a nationalist political party, which attracted members of both the GAA, the Gaelic League and similar organizations. The Gaelic revival was important to the growth of Sinn Féin and nationalist sentiment at the start of the 20th Century.

Following Ireland’s independence, the Gaelic League’s importance in promoting the Irish language and culture was reduced as the State took on this role. The State made Irish compulsory in schools and set out plans to preserve the culture.

While 42% of the population of Ireland in the 2006 census declared themselves as able to speak Gaelic, known also in Ireland as 'Gaeilge' or simply as 'Irish', the figure is sadly misleading. In reality it includes a huge number of people who can probably just remember a few words from school. The amount of people who can hold a reasonably fluent conversation in the language is below 10%. Given that every student in an Irish school has had 3-4 hours Irish language tuition per week in school for 13 years, this result could only be described at best poor and at worst a dismal failure.

The growing number of people who describe themselves as Irish speakers may be attributed to a growth in national pride associated with the global popularity of Gaelic culture, and the period of Irish economic prosperity of the 90’s up to 2008.

The educational experience of the majority of people learning the language has been largely a negative one. Because Irish was the first language of the State according to the Constitution, an assumption was made that people could speak it. Children learning the language were introduced to Irish as a written language before they had any conversational Irish.

Secondary students had to read literature and poems in Gaelic when many could not make simple sentences in the language. Many teachers who taught the language did not appreciate its value and their lack of enthusiasm, in addition to poor teaching methods, has done more harm than good.

It may be that Irish psyche often resists being told what to do by the powers that be (possibly the result of centuries of British domination). When the Irish State made Irish obligatory in schools after 1922, the move did not help to foster a great love of the language among students.

The requirement for Gaelic to enter university or to get a job in the Civil Service, set Irish as an obstacle to be overcome rather than a part of a rich culture to be embraced. Although these obstacles have been removed, and some improvements have been made to the teaching of the language, negative attitudes are still common.

In addition, the number of native Irish speakers in the Gaeltacht areas (Irish speaking areas) has been falling. For example, in the West, settlement overflow from the city of Galway is encroaching on the strongest Gaeltacht area to the west of the city around An Spidéal and beyond. Most of the new settlers do not speak Gaelic. 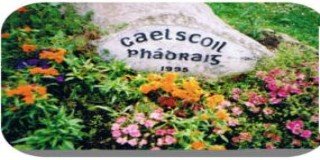 the growth of the Gaelscoil
-important to gaelic revival

On the plus side, the number of Gaelscoileanna at primary level is increasing enormously and offers some hope for Gaelic Revival aspirations. These schools teach all subjects in Irish, immersive style, and Irish is the language of communication for all school business. The role of the Irish TV station, TG4, a vibrant channel with young creative talent has also done a lot to positively affect people's attitude to the Gaelic language.

The Gaelic Revival movement managed to breathe new life into many aspects of Irish culture and sports but it remains to be seen whether the Gaelic language itself has a long term future. A change in attitude and approach is needed.

Find answers to some basic questions about the Gaelic language by clicking on the link.

To find out more about the success of our native sports on our Irish Sports page.