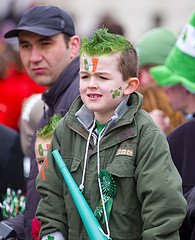 For one of the biggest days in the Irish calendar, I thought you might be in need of a few suitable St Patricks Day poems. I have put together song and verse below which should bring out the Irish roots in you.

And as I would love to add to this collection of Irish St Patricks Day poems, please make sure to send me your own favourites.

In case you're asking: When is St Patrick's Day?

It's the 17th March every year. The Irish government has discussed changing it in the past but it has been and will remain the 17th March. Too sacred too change.

St Patrick Was a Gentleman


St Patrick was a gentleman
sung by the Wolfe Tones

Saint Patrick was a gentleman, he came from decent people
He built a church in Dublin town and on it put a steeple
His father was a Gallagher, his mother was a Grady
His aunt was an O'Shaughnessy and his uncle was a Brady
Success to bold Saint Paddy's fist he was a saint so clever
he gave the snakes and toads a twist and banished them forever.

The Wicklow hills are very high and so's the hill of Howth, sir
But there's a hill much higher still, much higher than them both, sir
From the top of this high hill Saint Patrick preached a sermon
Drove the frogs into the bogs and banished all the vermin

There's not a mile in Eireann's isle where dirty vermin muster
But there he put his dear forefoot and murdered them in clusters
The frogs went plop, the toads went flop, slapdash into the water
The snakes committed suicide to save themselves from slaughter

O was I but so fortunate as to be back in Munster
I'd rebound unto that ground and nevermore should want, sir
There Saint Patrick planted corn, cabbages and praties
He had pigs galore, a gra a stor, altar boys and ladies

One green shamrock, in the morning dew,
Another one sprouted,
and then there were two.

Two green shamrocks, growing beneath a tree;
Another one sprouted,
and then there were three.

Three green shamrocks, by the cottage door;
Another one sprouted,
and then there were four.

Four green shamrocks, near a beehive
Another one sprouted,
and then there were five.

Five little shamrocks, bright and emerald green,
Think of all the luck
these shamrocks will bring.

Hail, glorious St. Patrick, dear saint of our isle,
On us thy poor children bestow a sweet smile;
And now thou art high in the mansions above,
On Erin's green valleys look down in thy love.

Hail, glorious St. Patrick, thy words were once strong
Against Satan's wiles and a heretic throng;
Not less is thy might where in Heaven thou art;
Oh, come to our aid, in our battle take part!

In a war against sin, in the fight for the faith,
Dear Saint, may thy children resist to the death;
May their strength be in meekness, in penance, and prayer,
Their banner the Cross, which they glory to bear.

Thy people, now exiles on many a shore,
Shall love and revere thee till time be no more;
And the fire thou hast kindled shall ever burn bright,
Its warmth undiminished, undying its light.

Ever bless and defend the sweet land of our birth,
Where the shamrock still blooms as when thou wert on earth,
And our hearts shall yet burn, wherever we roam,
For God and St. Patrick, and our native home.

I have to say that this St. Patrick's Day poem is likely to appeal more outside of Ireland. I don't why but Leprechauns have never been that big in Ireland (no pun intended!)

Leprechauns peeking,
Around a willow tree,
Pussy willows waking,
Longing to be free.
Colleens and shamrocks
And castles old and gray,
Put them all together
To make St. Patrick's Day.

The Wearing of The Green

Oh! Paddy, dear, and did you hear
The news that's going round,
The shamrock is forbid by law
To grow on Irish ground.
Saint Patrick's Day no more we'll keep
His color can't be seen
For there's a bloody law agin'
The wearing of the green.

I met with Napper Tandy
And he took me by the hand
And he said "How's poor old Ireland?
And how does she stand?"
She's the most distressful country
That ever you have seen,
They're hanging men and women there
For wearing of the green.

Then since the color we must wear
Is England's cruel red
Sure Ireland's sons will n'er forget
The blood that they have shed.
You may take the shamrock from your hat
And cast it on the sod,
But 'twill take root and flourish still
Tho' underfoot 'tis trod.

When the law can stop the blades of grass
From growing as they grow,
And when the leaves in summer time
Their verdure dare not show,
Then I will change the color
I wear in my caubeen,
But till that day I'll stick for aye
To wearing of the green.

But if at last our color should
Be torn from Ireland's heart,
Her sons with shame and sorrow
From the dear old sod will part.
I've heard a whisper of a country
That lies beyond the sea,
Where rich and poor stand equal
In the light of freedom's day.

Oh, Erin! Must we leave you,
Driven by the tyrant's hand?
Must we ask a mother's welcome
From a strange but happy land?
Where the cruel cross of England's thralldom
Never shall be seen
And where in peace we'll live and die
A-wearing of the green.

St. Patrick's Day is with us,
The day when all that's seen
To right and left and everywhere
Is green, green, green!

And Irish tunes they whistle,
And Irish songs they sing,
To-day each Irish lad walks out
As proud as any king.

I'll wear a four-leaf shamrock
In my coat, the glad day through,
For my father and mother are Irish
And I am Irish too!

Find out about the origin of that famous Irish and St. Patrick's Day symbol, the shamrock on our Shamrock symbol page.

For more Irish love poetry, make sure to visit our Irish Love Poems and Irish Wedding Poems and Songs page.

We also have a useful Shamrock template page and for the kids a special St. Patrick's Day Shamrock colouring page.