The meaning of Celtic Knot Symbols

As with so many things the Celts left us, discovering the real meaning of Celtic Knot symbols is not easy. This is probably because the Celts were not great writers! And as we know, when we leave anything to be passed on orally, things have a tendency to get very confused and several interpretations are likely to emerge.

Nonetheless, Celtic knot art is a very common in Ireland and Scotland and this beautiful symbol is also to be seen in other countries and locations with a Celtic heritage. When you have finished reading about the Celtic knot below visit, there is a much bigger gallery on our Celtic knot design page.

But first "What is a Celtic knot?" 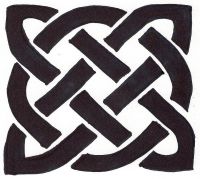 In Celtic Art, Celtic knots (also known as 'endless knots' or 'mystic knots') are series of overlapping or interwoven knots which have no clear start or end.

They started to appear in Celtic Art in the second half of the 5th Century whereas Celtic spirals appeared much earlier, as early as 600 BC.

While they may have perfected it, the Celts were not the first to come up with the knot design. The origin of the Celtic knot may go back to the Romans but most likely has its roots even earlier in Byzantine Constantinople. 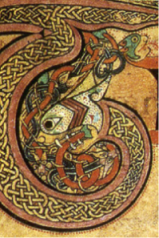 Use of Celtic Knot Symblo on wonderful Book of Kells

The Irish Celtic knot represents the full development of the knotwork tradition. The style is known as Ultimate La Tene or Hiberno-Saxon Insular art and emerged around 650 AD when Gaelic monks put together biblical manuscripts in monasteries in Ireland and the island of Britain.

Great examples of Celtic knot patterns appear in the ornamentation of early Christian manuscripts such as 8th Century Book of Kells as well as the Lindisfarne Gospels (late 7th Century). Knots were often used for elaborate decoration or illumination of initial letters or for the hair of the apostles.

You can also see great examples of Celtic knotwork on many Celtic crosses or Irish High crosses erected between 8th to 12th Century. Many of these crosses combine scenes from the Bible with many of the basic Celtic patterns including spirals, key patterns, animal figures and knotwork. 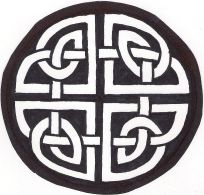 Celtic Knots look likes strips which wind, weave and loop their way around each other. It can be just one strand which crosses back and forth on itself. Other times it is a number of strips.

True Celtic Knots do not have loose ends. Some Celtic animal symbols (called zoomorphs) show a similar type of weaving to a knot. However, the difference is that these end with a loose end (often the tongue or tail!) and so are not celtic knots in the true sense.

There are different opinions on this but the basic understanding is that the unending knot symbolizes the unending cycle of life. The interweaving points to the interdependence and interconnection of physical and spiritual aspects of our being.

For example the celtic knot meaning or symbolism of the three-lobed Triquetra or Trinity knot is the inter-connection of the three planes of existence: mind, body, and spirit.

For many more celtic knot images and designs click on link.

I have put together some other great pages on other Celtic and Gaelic symbols which you will find of interest.

Some of the best samples of Irish Celtic Knots can be seen on High Crosses. Take a look at our Celtic Crosses page with a really good gallery here.

Check out the these other Gaelic symbols.

Those tall thin Irish Round Towers