The Richness and Fun of Gaelic Culture 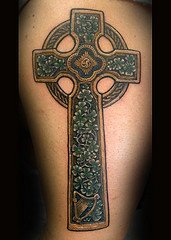 If you've already had even the the slightest experience of Gaelic culture- dance, language, music, history and traditions, it's almost impossible to resist not wanting more. The appeal is global. You can find people playing Irish football in Hong Kong, ceili and set dancing in Boston, and learning Irish Gaelic in Paris.

The culture is both fascinating and fun. Many parts of it are strong and thriving both at home and abroad. However, the native language in both Ireland and Scotland is threatened primarily by the spread of English around the globe.

This site hopes to celebrate and inform on all aspects of the culture-both strong and weak.

While I go into the complexities on our Celtic language page, you can think of the Gaelic culture as a subset of the broader Celtic culture. The focus here will be on matters in relation to Irish culture but we will also take a look at Scottish culture too.

Which aspects of the Gaelic culture and Gaelic Language can you expect to be covered here?

Learn about the most important and interesting Gaelic Symbols
The Shamrock, Sheela na Gigs, the Celtic Cross, the Celtic Knot, the Claddagh Ring and the Round Towers of Ireland are national symbols. Find out about their origin and visit the related galleries.

The Mystery behind the Banshee of Ireland.
Learn about one of the most fascinating creatures or spirits of Irish folklore.

What are the Traditional Sports of Ireland?
Discover the traditional sports of hurling and gaelic football and enjoy the excitement of these games.

What does it mean to be Irish?
Find out what Irish Times readers consider what being Irish means. Funny, inciteful and not alway flattering quotes but well worth a read. A modern view.

The Famous and Not So Famous Irish Sayings and Proverbs
There are Gaelic sayings about every aspect of life and love and for every occasion. I have put together the wise, unusual and funny ones for weddings, birthdays etc.

Celtic Poems of Love and Romance
I have put together a collection of Irish love poems, many of which are  beautifully translated from Gaelic and there's a special Irish wedding poem page.

Irish Wedding Customs and Traditions
Find out about Irish wedding customs and traditions, an interesting part of Gaelic culture, and visit our Irish wedding superstitions page for some far-fetched beliefs.

Some Great Irish Blessings
There are also traditional  Irish blessings for every situation and here you are sure to find one to meet your needs.

A damn good set of Irish Toasts
Like blessings and sayings, there are Irish toasts for every moment. The Irish have a reputation for liking to drink but their enjoyment and celebration of good company is even greater.

A Fine Collection of Funny Irish Quotes
The Irish love of words, whether in native Gaelic or adopted English, is all about fun. You'll love this collection of funny Irish quotes with special pages from some masters such as Oscar Wilde, Flann O' Brien, George Bernard Shaw, Brendan Behan and Spike Milligan.

The Great Irish Curse
The Irish way with words also extends to curses and the creativity and quirkiness behind these examples of wishing bad on someone is hard to beat. An integral part of Gaelic culture but not for the faint hearted!

Did you know that Scotland is the home of Golf?
The history of golf begins many centuries ago. Find out about its origin and learn some interesting golf history trivia.

Learn some words in Gaelic
Want to learn Gaelic? Here are some basic Irish words, Gaelic phrases and expressions to get started.

The Letters of the Gaelic Alphabet
Both Irish and Scottish Gaelic have 18 letters. While modernisation has taken place, the decorative Gaelic font is still used at times in Ireland. Take a look.

Learn about the Gaelic Revival Movement
As I have mentioned above, many parts of Gaelic culture are increasingly popular worldwide. However, the Irish Gaelic language is in trouble but refuses to die. There has been a Gaelic Revival movement for the last 150 years which has met with mixed success.

Is there a Celtic Language?
In fact there are six and I have provided a  good introduction to each. You can also listen to what each sound like here.

The Ancient Celtic Religion
There's a lot of interest  in but little understanding of what the ancient Celts believed in. Find out about religious practice before the arrival of Christianity in Ireland. Unravel some of the mystery of those ancient Celtic priests, the Druids.

Best Irish Whiskey Brands
Whiskey, from the Gaelic words 'uisce beatha' meaning 'water of life' has been made in Ireland for centuries. Discover the wonderful Greenspot Irish whiskey or gems such as Paddy Irish Whiskey, a great everyday whiskey.

Irish Prayers in Gaelic
For many Irish people the only Irish Gaelic they remember is in the prayers they learnt as children. I have put together a good list of common prayers here.

So Céad Míle Fáilte (a hundred thousand welcomes). Come in, have a look around. Your feedback will be greatly appreciated. We have lots more ideas for this site but not as much time as we would like.  But little by little....