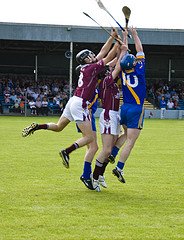 Traditional Irish sports are dominated by Gaelic football and hurling. When Irish people go to a sport event, one out of every two are attending a Gaelic football or hurling match. This figure is incredible when you consider that both sports have amateur status. Even more incredible is to see how many times a year, Croke Park, the national stadium attracts a crowd in excess of 60,000 to see either of the two sports. The games are organized by the GAA (Gaelic Athletic Association), without a doubt the strongest community based organization on the island of Ireland. Huge numbers of women also play both sports (the female version of hurling is called camogie).

Soccer and rugby are also very popular sports. Soccer in Ireland is played generally to a semi-professional level while rugby has become professional in recent years.

Other traditional Irish sports in Ireland are horse-racing, fishing, handball and of course golf.

In Ireland Gaelic football is most commonly called ‘Gaelic’ or just ‘football’ or ‘gah’ (after the GAA, the Gaelic Athletic Association) and occasionally ‘Caid’ particularly in the south-west of the country.

It’s a game of 15 men against 15 on a grass pitch, a good 20 metres (about 20 yards) longer and about 10 metres (10 yards) wider than a soccer pitch. The funny thing about Irish football is that it is as much if not more about using your hands as your feet. The ball is kicked, caught, hand-passed and punched. While players can’t run with the ball in their hands more than three steps, they can move the ball up the field by ‘soloing’, basically the skill of running and repeatedly kicking the ball into the hands and dropping to the feet again.

The game lasts 60 mins at most levels and 70 mins at the highest inter-county level. There is a break of 15 minutes at half-time. The ball is a round leather ball, a little smaller than a soccer ball.

The game is physical with shouldering someone off the ball a legitimate and valued skill. It’s also fair to use one hand to knock the ball out of an opponent’s hand. A particular skill which is appreciated greatly is that ability to field a ball, to jump high and snatch a ball from the air.

While Gaelic football reaches its highest level at the inter-county games, some of the greatest rivalries are at parish or club level. Even the best county players will play for their parish club and the passion, craic (fun) and begrudgery which is to be witnessed at this level can be incredible.

To get a taste for it, below is part of ‘a slightly biased’, somewhat crude but hilarious commentary of the now famous Eddie Moroney, taken from a county final. You can find footage of the actual match and more commentary on YouTube but be ready for a few expletives!

Hurling has to be the most beautiful and skilful of the traditional Irish sports. The game can be traced back thousands of years and features strongly in the legends of Ireland.

The pitch, scoring, number of players per team and many of the rules are similar to Gaelic football (see above). However, it is played with sticks called a 'hurley' or 'camán' in Gaelic and a small leather ball called a 'sliotar', about the size of a tennis ball. The game demands a high level of skill. Camogie is the female version of hurling.

As with Gaelic football, the objective of hurling is to score more points and goals than your opponent’s team. The ball may be caught with the hand but a player may not run more than four steps with it in his hand. He may choose to hit the sliotar forward with his hurley on the ground or in the air, or he may run with it on the hurley -a wonderful skill to watch when a player is at full flight.

Many players wear a helmet with or without a faceguard. Look at the video to get a real feel for this exciting game. As with football, the passion for the game is often most intense at club or parish level. At the highest county level, hurling has been dominated for the last number of years by Kilkenny.

It's impossible to talk about traditional Irish sports without mentioning the influence of the GAA. It is a community based sports organization which promotes and organizes the sports of Gaelic football, hurling (and camogie), handball and rounders (similar to baseball). However, its interest is in preserving and enhancing all aspects of Gaelic culture.

While over the years, it has been often criticized for being intolerant and conservative, many would now agree that its voluntary spirit has had a profoundly positive effect on Irish life. On the island of Ireland no other organization can boast of having almost .75 million members. The organization also promotes Gaelic sports and culture around the world and games of football and hurling are growing in popularity in the US, Australia and other places where there is a strong Irish diaspora.

As well as hurling the other big stick game in Ireland is Golf. You will love our Golf History Trivia and Golf Facts page. Make sure to have a look.

Make sure to check out our Origin of Golf page for a brief Scottish Golf History.