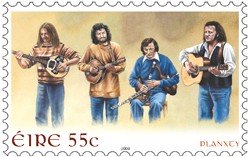 My Famous Irish Song list may be a small personal collection but there are so many traditional and famous Irish songs that attempting to make anything other than a personal selection is difficult if not impossible.

Lyrics to Irish songs, like in many other cultures, have many different versions. As each singer or group make a song their own, they add or change a word or two. Depending on who you talk to, changing the original song writer's words is sacrilege or just part of the creative process. I am probably of the latter view. Anyway, the versions of the famous Irish songs included here, while traditional, are the ones I like, rather than being always 100% true to the original.

Where I know who has written the song lyrics, I include the name but I don't have all of them. By the way make sure you check out other traditional Irish song lyrics on our other Lyrics to Irish Songs page and you will also find some beautiful Irish love songs on our Irish Wedding Poems and Songs page and Irish love poems page.

Oh Dan-ny boy, the pipes, the pipes are calling
From glen to glen, and down the mountain side
The summer's gone, and all the flowers are falling
'Tis you, 'tis you must go and I must bide.
But come ye back when summer's in the meadow
Or when the valley's hushed and white with snow
'Tis I'll be here in sunshine or in shadow
Oh Danny boy, oh Danny boy, I love you so.

And if you come, and all the flowers are dying
And I am dead, as dead I well may be
You'll come and find the place where I am lying
And kneel and say an "Ave" there for me.

I took a stroll down broadway
Meaning not long for to stay
When who should I meet but this pretty fair maid
Come a-traipsing along the highway
She was both fair and handsome
Her neck, it was just like a swan
And her hair, it hung over her shoulder
Tied up with a black velvet band

I took a stroll with this pretty fair maid
And a gentleman passing us by
Well, I knew she meant the doing of him
By the look in her roguish black eye
A gold watch she took from his pocket
And placed it right into my hand
And the very first thing that I said, was
Bad 'cess to the black velvet band

Before the judge and the jury
Next morning, I had to appear
The judge, he says to me:
"Young man, you're case it is proven clear
We'll give you seven years penal servitude
To be spent far away from the land
Far away from your friends and relations
Betrayed by the black velvet band"

So come all you jolly young fellows
A warning take by me
When you are out on the town, me lads
Beware of the pretty colleens
They'll feed you with strong drink, me lads
'Till you are unable to stand
And the very first thing that you'll know is
You've landed in Van Diemens Land

Her eyes they shown like diamonds
Her neck, it was just like a swan
And her hair, it hung over her shoulder
Tied up with a black velvet band

Patrick Kavanagh wrote the poem but had Luke Kelly in mind to sing it and made it one of the most famous traditional Irish songs of the last fifty years.

The words of this song are traced to a Gaelic song 'Do bhí bean uasal' ("There Was a Noblewoman"), which is attributedto the poet Cathal Buí Mac Giolla Ghunna

I wish I was in Carrickfergus, only for nights in Ballygrand
I would swim over the deepest ocean,
The deepest ocean for my love to find
But the sea is wide and I cannot swim over
And neither have I wings to fly
If I could find me a handsome boatman
To ferry me over to my love and die

My childhood days bring back sad reflections of happy times I spent so long ago
My boyhood friends and my own relations have all passed on now like melting snow
But I'll spend my days in endless roaming, soft is the grass, my bed is free
Ah to be back in Carrickfergus on that long road down to the sea

And in Kilkenny it is reported, there are marble stones, as black as ink
With gold and silver I would support her, but I'll sing no more now till I get a drink
I'm drunk today and I'm seldom sober, a handsome rover from town to town
Ah, but I'm sick now, my days are numbered so come all ye young men and lay me down

This song was written originally by Patrick Joseph McCall

Lift MacCahir Óg your face brooding o'er the old disgrace
That black Fitzwilliam stormed your place, drove you to the Fern
Grey said victory was sure soon the firebrand he'd secure;
Until he met at Glenmalure with Fiach Mac Hugh O'Byrne.

Curse and swear Lord Kildare
Fiach will do what Fiach will dare
Now Fitzwilliam, have a care
Fallen is your star, low
Up with halbert out with sword
On we'll go for by the Lord
Fiach MacHugh has given the word,
Follow me up to Carlow.

See the swords of Glen Imayle, flashing o'er the English Pale
See all the children of the Gael, beneath O'Byrne's banners
Rooster of a fighting stock, would you let a Saxon cock
Crow out upon an Irish rock, fly up and teach him manners.

From Saggart to Clonmore, there flows a stream of Saxon gore
O, great is Rory Óg O'More, sending the loons to Hades.
White is sick and Lane is fled, now for black Fitzwilliam's head
We'll send it over dripping red, to Queen Liza and the ladies.

Famous Irish Song sung by Orla Fallon
Sally Gardens is learnt by
many kids at school in Ireland
It was down by the Sally Gardens,
my love and I did meet.
She crossed the Sally Gardens
Wwith little snow-white feet.
She bid me take love easy,
As the leaves grow on the tree,
But I was young and foolish,
And with her did not agree.

In a field down by the river,
my love and I did stand
And on my leaning shoulder,
she laid her snow-white hand.
She bid me take life easy,
Aas the grass grows on the weirs
But I was young and foolish,
A and now am full of tears.

We also have some famous Irish love songs on our Irish Love Poems and Irish Wedding Poems and Songs page.