The Low-down on the Gaelic Language 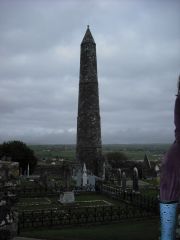 Is the Gaelic language and the Irish language the same? Isn't Irish just a dialect of English? What has caused the decline of the language?

People are often confused about the language of the Irish and if you've been through this site, I can well imagine that I may have added to the confusion. So I have put together an FAQ on the language to clarify things as best I can. I have relied considerably on the book A New View of the Irish Language, edited by CaoilFhionn Nic Phaidín & Seán Ó Cearnaigh as a reference.

Common questions about the Irish Language

Isn't the Irish Language just a dialect of English?
Are Gaelic and the Irish language the same?
Was Gaelic always the language of Ireland?
What languages have influenced Gaelic?
How has Gaelic influenced the English language?
What is Ogham? Is Ogham a language?
What caused the decline of the Gaelic language in Ireland?
Has there been an attempt to revive Gaelic?
What does Irish Gaelic sound like?
What is Hiberno-English?

Isn't the Irish Language just a dialect of English?

Absolutely not. The Irish language is a Celtic language. English is a Germanic language.

Both the Germanic languages and Celtic languages have their roots in an Indo-European language but as early as 5000BC they started to evolve in different ways. (Indo-European is the parent-language of not only Celtic and Germanic but also Latin and many other languages.)

Are the Gaelic language and the Irish language the same?

Yes but there are actually three Gaelic languages - Scottish Gaelic, Irish Gaelic and Manx Gaelic (in the Isle of Man).

Scottish people always refer to their own Celtic language as Gaelic.

Was Gaelic always the language of Ireland?

The first Celtic speakers came to Ireland around 500BC. There were people living here at the time but we know little about the language they spoke. We also know little of the version of Celtic that those arriving brought.

It is important to note that a lot of Europe, and northern Europe especially, spoke some version of a Celtic language at the time.

The recorded history of Gaelic really begins around the 5th century AD with the arrival of Christianity, Latin and writing. The Irish referred to their language as Gòidelg at that time. This later became Gaeilge.

What languages have influenced Gaelic?

Before the arrival of the Christians, Gaelic was largely a spoken language. Writing in Ireland began in Christian centres of learning, the monasteries.

Most of the Gaelic words to do with literacy and the Church have their origin in Latin (see table below). The Latin alphabet was adapted for writing purposes though the script had a particularly Gaelic look.

The Vikings arrived in the 9th Century and added many words to do with the sea and trade to the Gaelic language e.g trosc for cod fish, stiúr for rudder.

The Anglo-Normans who arrived in 1169 added words from French, many to do with architecture, administration and war. For example, the Irish Gaelic word for room is seomra which comes from the old French chaumbre.

English has, as you would imagine, also had a huge effect and words have been, and continue to be, adopted from English.

How has Gaelic influenced the English language?

There are a number of words of Irish Gaelic origin that are used in English. For example, the word galore comes from the irish go leor.

When you say in English 'He twigged what was happening' remember that it comes from the Irish word tuig meaning 'to understand'. Some believe that the American slang 'Do you dig?' comes from the same root.

The Irish word bodhraim, meaning to deafen, gave English the word to bother.

There are many other examples which I hope to return to at some point here on GaelicMatters.com.

What is Ogham? Is Ogham a language?

Ogham was an archaic system of writing and not a language. It was a system based on Latin that involved cutting a series of notches on wood or stone and was used mostly to mark the graves of important people. As use of the Latin alphabet grew after the arrival of Christianity in the 5th Century, the use of Ogham writing died out. See also Gaelic Alphabet page.

What caused the decline of the Gaelic language in Ireland?

Up to the 17th Century, Gaelic (or Irish or Irish Gaelic or Gaeilge if you prefer) was the language spoken by almost everybody in Ireland.

Because of the English Tudor conquest around that time, land was taken from the native aristocracy and given to English-speaking settlers. English became the language of administration and power in Ireland. From the 17th Century to the mid-19th century there was a huge increase in population to 8 million people, but the percentage of Gaelic speakers fell. To succeed in the Ireland of that time meant learning or speaking English. The Irish language began to lose its value rapidly.

The Irish potato Famine of 1845-1848 killed or caused to emigrate some 3 million people during that period. The part of the population most affected by the Famine was the poorer part, mostly Gaelic speakers.

Has there been an attempt to revive the Gaelic language?

In the late 19th Century, there was a real attempt to prevent the Irish Language from dying. It is referred to as the Gaelic revival and was led by the Gaelic League (Conradh na Gaeilge). By that time Irish Gaelic was not even permitted, never mind taught in schools. 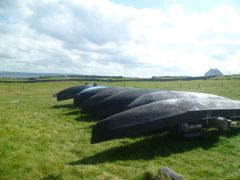 While the Gaelic League had some success, by the beginning of the 20th Century, less than 20% of the population spoke the Irish language. Most of these were from fishing or small farm backgrounds -the poorest part of the population, experiencing the highest rate of emigration.

Hiberno English refers to the type of English or dialect of English spoken by many people in Ireland. It is heavily influenced by Irish Gaelic and the structures of the Irish language.

Is herself at home? = Is your wife at home?

I'm after having me dinner = I've just had my dinner.

We had mighty craic last night= We had great fun last night.

Other Pages related to Gaelic Language

As well as our Gaelic Revival and Celtic Language pages, if you want to get a sense of the Irish language make sure to have a look at the following links.

Our Learn Irish Gaelic Language page will give you some tips on how to go about learning the language if you really want to go further.