Get to grips with some Gaelic Irish Words 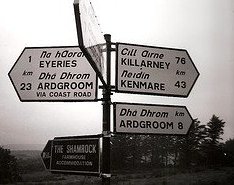 If you want to learn to speak Gaelic or Gaeilge or Irish as it is also known, it is worth getting to grips with the basic list of Gaelic Irish words below. If you spend some time in Ireland, you will see Gaelic on lots of signs and placenames and hear it on Irish television and radio.

While English is certainly the dominant language in all but some Gaeltacht (Irish speaking) areas, a trip to Ireland will be so much richer if you have at least a smattering of Irish Gaelic.

It is important to know also that some Gaelic words vary from one dialect to another. In Ireland there are three key dialects in the North (Ulster), West (Connaught) and South (Munster). For example, the word for table in Connaught and Munster Irish is bord while in Ulster Gaelic it is tábla.

Because of TV and improved communications, most Gaelic speakers are also now more familiar with and influenced by each other's dialects, so learning one dialect does not cause the communication difficulties it might once have.

Anyway, most people in Ireland learn standard (caighdeán) Gaelic in school, basically a mix of all three dialects. I have taken the most common form of the Irish words below. I give a non-linguistic pronunciation guide to the words below, a fairly literal translation and the English translation.

And while it can be a little daunting for someone learning the language at the beginning, it is important to know that the form of a Gaelic word can and does change, not only in the singular and plural forms, but also depending on whether it is used in the nominative, vocative, accusative, and genitive cases.

"What the hell does that mean?", I hear some of you ask. While I won't go into all the details (for that you need a more intensive grammar lesson), the easiest way to explain is with an example of the kind of changes that Irish words can undergo.

an fear
on far
the man

hata an fhir
hot-ah on ir
the man's hat

do na fir
duh nah fir
to the men

In the pronunciation guide for all the Gaelic Irish words below I have left 'ch' as is. This is because 'ch' in Gaelic does not have an equivalent sound in English. That said, many people will be familiar with the throaty sound made in the Scottish and Irish word 'loch'. This is the correct sound. If you are not able to replicate this sound, pronounce 'ch' as a 'k'. It may not be correct but you will be understood. Just don't pronounce 'ch' as 'ch' in 'church' which no one will understand.

I have also included what is a simple video of the categories on this page but should be enough to help you with getting the pronunciation right. I am not a native speaker but it should be reasonably accurate.

Days of the week in Gaelic

Months of the Year in Gaelic

The Gaelic Irish words used for counting change somewhat when used with an object. For example, if I am just counting 1-3 (cardinal numbers), it will be simply a haon, a dó, a trí. However, if I put an object (noun) with it to count boats it will become aon bhád amháin, dhá bhád, trí bhád. I include both below for numbers 1-10.

Gaelic Irish words -quite common on Irish lavatories and sometimes without the images to help! photo courtesy of dlkinney

Irish words for Parts of the Body

I am open to correction or suggested improvements on anything above. I would also love to hear of other categories of Gaelic Irish words you think should have been included as basics. Get in touch with me through the contact GaelicMatters page. Or add a comment below

Other Pages Related to Irish Words