Writing in the Gaelic Irish language first appeared around the time St Patrick introduced Christianity to Ireland in the 5th century. As Latin was the language of communication within the Church, most early writing was in Latin and the writers were most often priests or monks. The Gaelic written alphabet used in Irish literature is an adapted form of the Latin alphabet.

The Irish Gaelic Alphabet in Print 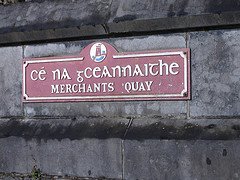 The traditional Irish alphabet is basically an adaptation of the Latin alphabet and was used commonly in Ireland until the middle of the last century. You can still see it on some signs and public notices in Ireland and on shop signs. It really consists of 18 letters, similar to the Scottish Gaelic alphabet. The Gaelcló font that is used below includes the other 8 letters, so I have included them in parentheses or brackets. 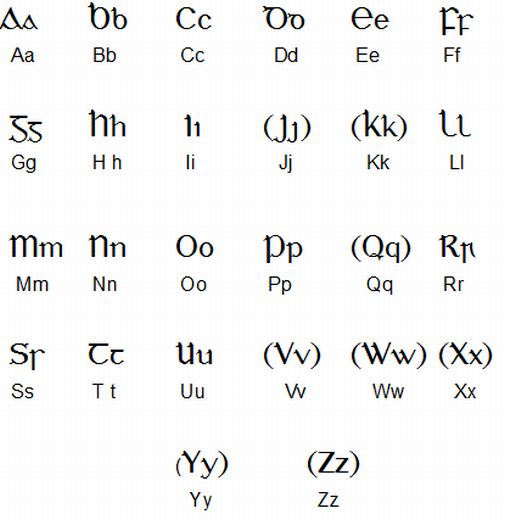 Today people write and type Irish Gaelic with the standard Latin alphabet. The Irish alphabet uses 24 of the 26 letters of the English alphabet, as opposed to the original number of 18. That said, there are few words with j, k, v, x, y or z, and the ones which do exist are generally words incorporated from English. Examples include zú (zoo), vóta (vote), yóyó (yo-yo).

While I am open to correction, there are no examples of words with the letter 'q' as they are generally handled by using the hard Irish 'c'. The letter 'c' in Gaelic is pronounced as the English 'k'. So, for example, the country 'Qatar' is translated as 'Catar' and pronounced similarly.

There is also no real need for 'w' either but the sound exists, you may be surprised to read, in the combination of consonants 'bh' or 'mh'. For example 'an-mhaith' which is pronounced 'an-wah' means 'very good'.

It is important to remember also the elongated forms of vowels. The accent on each letter is called a 'fada' meaning 'long'. So we refer to 'ó' as 'o fada'

Note on the Ogham Alphabet 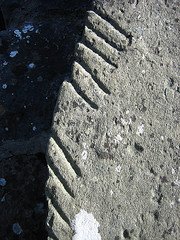 When the the Latin based Gaelic written alphabet was introduced towards the end of the 5th century, it existed for some time alongside the archaic Ogham alphabet, the earliest written Gaelic alphabet.

The Ogham alphabet was a basic system of writing consisting mainly of a series of lines to denote a letter. Ogham writing was often carved into sticks or trees but the surviving examples are in stone- see photo. The Latin alphabet gradually replaced the Ogham alphabet in the 6th and 7th century.

Compare the Irish Gaelic Alphabet with the Scottish Alphabet

Learn more about the Gaelic Language and Celtic Languages by visiting the links.