It's hard to think of a more well-known emblem so closely identified with a country than the Irish shamrock symbol. You only have to see a shamrock and a whole pile of Gaelic and Irish associations come to mind.

Even though the Irish Harp is the official symbol of Ireland and you will see it on all Irish minted euro coins, it is the shamrock which most popularly represents Irish people at home and abroad.

What is a shamrock? 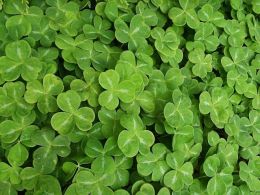 Basically it's a trefoil, a three-leaf species of clover. While growing up, they taught us that clover and shamrock were distinct plants but botanists will say that this is not true. However, the traditional Irish shamrock is smaller than many other varieties of clover and is of the Trifolium repens or Trifolium minus species. The word for shamrock in the Irish language is ‘seamróg’ meaning ‘little clover’.

Legend of the shamrock 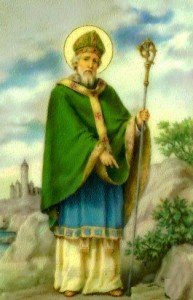 The Irish shamrock symbol is closely associated with St Patrick, the patron saint of Ireland. St Patrick is believed to have been from Scotland or Wales. Irish raiders captured and enslaved him at the end of 4th Century. He spent six years in slavery, probably in the West of Ireland. While in captivity, he turned to his religion for comfort and strength. He managed to escape home finally and years later, ordained as a priest, he returned to convert, at that time, pagan Ireland.

The story of the Irish trefoil relates to St Patrick trying to teach the Irish about the Blessed Trinity, the Christian concept of three Gods-Father, Son and Holy Ghost (Spirit) in one. One day as he was struggling to get his message across, he picked up a shamrock, a plant believed to be sacred to the druids, and asked "Is it one leaf or three?" "It is both one leaf and three," was their reply. That's how he managed to grab their attention.

People celebrate St Patrick's Day is the on 17th March each year, the day St Patrick died (supposedly). In Ireland it's a public holiday and most businesses close. There are colorful parades in most towns throughout the country and this tradition is copied in cities all over the world where there is a sizeable Irish population.

Traditionally men and women wore a bunch of shamrock in their lapel on St Patrick's Day. That is less common nowadays among younger people, probably because the shamrock shrivels after a few hours!

If you'd like to get ready for St. Patrick's Day by decorating your place, click on the link to find an Irish shamrock symbol template in various sizes. Also check out the kids shamrock coloring page.

In order to get ready for the 17th March, the biggest day in the Irish calendar, you really should have a look at our St. Patrick's Day Poems and Songs page.

There are many other Gaelic symbols, some not as well known as the shamrock. Make sure to have a look at the following pages too.

The tall thin Irish Round Towers