The most famous Sheela na Gig at
Kilpeck in England

There is no stranger Gaelic symbol than a Sheela na Gig (also known as Síle na Gig). These are frankly weird statues of female figures or hag-like beings with ugly stares. They are also completely naked, legs open with private parts on display.

While you will see similar figures in certain Continental churches, you usually find them in the company of other sinners and with their bodies in proportion.

In Ireland and Britain, however, sheela-na-gigs are usually on their own and their bodies and just not right anatomically. They are made to look as strange as possible often with triangular heads, no hair, bulging eyes and ears sticking out. They have ugly teeth or no teeth at all. Yet they have the arms and legs are of a young woman.

Many believe the name 'Sheela na Gig' comes from Gaelic and means 'old woman with the breasts'. And yet most do not have breasts. An alternative explanation is that 'Gig' is related to the Irish slang for vagina 'gee' or an old English and Scottish word 'gig' or 'geig' meaning the private parts of a woman. If this explanation is correct it could mean 'Hag of the vulva'.

The majority of the statues are located above entrances to monasteries, churches and castles. They are more common in the South of Ireland with a great number in County Tipperary. 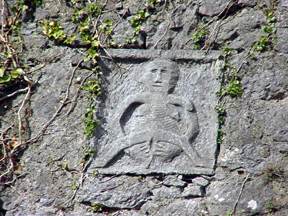 Sheela na Gigs are sexual symbols associated with Gaelic Ireland in 12th to 16th centuries. While it's possible that they represent ancient Celtic goddesses, there are no examples from before the 12th Century. That makes many think that they were actually introduced by the Normans (who arrived in Britain in 1066 and in Ireland in 1169) and that they could indeed represent Scandinavian goddesses instead.

One way or another, they are symbols of fertility and people believed they healed the sick and kept evil away. For that reason they were put above entrances.

Despite that, it always seems strange to me that such a pagan symbol should get such pride of place in many Christian buildings. So it's not surprising to learn that there would be a lot more in existence today but for the fact many sheela-na-gigs were destroyed after the 17th century for representing un-Christian idols.

The vast majority of the ones that have survived are in Ireland. There are in the region of 75 of them with about 30 others spread through England, Wales and Scotland.

There is no more famous a Gaelic symbol thand the shamrock. Learn about the legend associated with it on our Shamrock Symbol page.

Discover the reason behind for the ring on the Irish Celtic Cross by clicking on the link.

Find out about those tall thin Irish Round Towers

There is a very good article on this Sile na Gigs by Shay Clancy, a researcher at the Hunt Museum in Limerick at following link