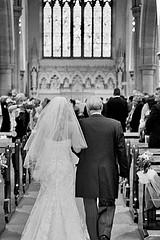 Irish wedding superstitions are full of advice. I won't dare to say how much truth is in them but they offer traditional guidance about rain on a wedding day, the co lour to marry in, how to keep your husband, when to retire on your wedding night and a host of other things. Many Irish wedding customs and traditions reflect or mirror these superstitions.

It's interesting to think of superstitions as expressing the broad fears and hopes of a culture and this is certainly the case in traditional Ireland. While many of these wedding superstitions seem farfetched, some still survive in parts of the country.

Dreaming of the one you will marry

Great importance was attached to the power of dreams in ancient Ireland and there are quite a few associated wedding superstitions.

It was common for a would be bride or groom to tie a little bag of clay around the neck when going to bed. If you did so, it was said that you would dream of your future husband or wife.

It was said that if a girl stole a salt herring and ate it without taking a drink before going to bed, she would dream of her husband.

In one part of the North of Ireland, it was considered sure to work if a girl sprinkled the four corners of her mattress with salt before going to bed, saying:

Salt, salt I salt thee
In the name of God in unity.
If I’m for a man
Or a man for me
In my first sleep
May I him see.
The colour of his hair
The clothes he’ll wear
The day he’ll wed with me.

The best day to marry

Tuesday the best day of the week to marry

While in some parts of the Ireland, Monday was considered a bad day for a wedding ceremony and the start of a new marriage, Tuesday was regarded by most as the best day to get married and it was very popular. Friday was also believed to be an unlucky day to marry.

Marry on Monday for wealth,
Tuesday for health,
Wednesday the best day of all,
Thursday for crosses,
Friday for losses,
and Saturday no day at all.

Another superstition favoured April over May and you would hear the expression 'Marry in May and Rue The Day' but 'Marry in April if you can, joy for maiden and for man'.

Rain on a Wedding Day 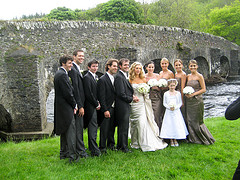 Irish wedding superstition favoured, as in many parts of the world, a sunny day for marrying. Rain was considered to foretell a life of hardship.

'Happy is the bride that the sun shines on' was a popular phrase and it was also thought that the woman who lay down in the sunshine on her wedding day, would even conceive more easily.

Never green for an Irish wedding?

Despite what you might think, another bridal superstition considered green to be an unlucky colour to get married in. The belief was that green appealed to the fairies and they would make mischief for the bride.

However, it was also believed that it could be a colour for the bridesmaids to wear as the fairies would be distracted by them rather than focus on the bride

While most brides would be distraught to tear their wedding dress on their wedding day, according to Irish wedding superstition, it is actually considered to be really good luck

If a glass or cup were broken on the morning of your wedding, a bad sign.

If a dog licked the groom or bride on the morning of the wedding, bad luck in store.

If the wedding ring fell to the floor during the ceremony, it didn't augur well.

Another Irish wedding superstition recommends that the groom be the first to kiss the bride on her wedding day. If somebody gets there first, it means bad luck ahead

It was also believed that if an enemy tied a knot in a handkerchief when two people got married, an Irish superstition also said that no child would be born to the couple until the malicious knot was opened. 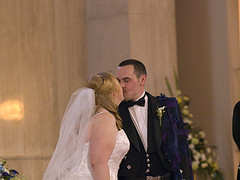 The groom should kiss the bride first
-photo by SebastianDooris

Another Irish wedding custom recommended that the newly married couple should always retire for the night at the same time. The wedding superstition was that if the bride were left alone the fairies would come and take her away because of her fine clothes.

After the wedding day

Another Irish custom said that the bride’s home should never be re-entered by her or her new man until at least a month after their wedding day or bad luck would follow.

And even more on the wedding theme with a whole page of great Irish sayings about love and marriage.

And we have a whole selection of Irish Wedding poems and Irish love poems to enjoy!