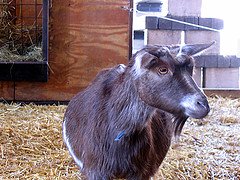 "If you only have a buck-goat, be in the middle of the fair with it. " -photo courtesy of Ubercultur

When you start putting together a list of Funny Irish Sayings together, you realize that, written, many do not seem as humorous, without a context. It all has to do with the delivery. You can take even the most serious saying and delivered in the right tone at the right moment, it can be hilarious. However, even the funniest Irish or Gaelic Saying, delivered badly can be received in silence.

I should also point out that both serious and funny Gaelic sayings are not to be treated as something sacred. They are to be played with, had fun with and adapted to meet the needs of a particular situation, as per my story below. And remember to check out the links to our other proverbs and sayings pages at the end of this page.

You may be familiar with the Gaelic saying 'Mol an óige, agus tiocfaidh sé' which means 'Praise the youth, and it will come (it will get there). Here's a story of a funny of the use of that Irish saying which involves a slight adaptation.

I remember taking a Gaelic language course in Oideas Gael in County Donegal a number of years ago. In class we had been studying 'seanfhocail' or 'Irish sayings', which included the above saying.

As an afternoon activity, there were a number of things one could do and we were discussing in class what each of us were planning to do that afternoon. A friend of mine in the class, who fancied his chances with some of the women on the course, was going to do some set dancing for the afternoon-where the highest concentration of females was sure to be.

The teacher had been giving him a hard time, making some good-humoured fun of his attempts to hook up.

"So you know where the good dancers and good-looking young women are going to be this afternoon", the teacher remarked.

In an instant, my friend replied, with a cheeky grin on his face, and a glint in his eye "Sin é, mol an óige, agus tiocfaidh mé". (Translated it means "Praise the youth, and I will come")

The class cracked up laughing at the clever change of just one word in the famous Irish saying to give it a whole new meaning.

If you have a funny Irish saying or proverb story, I would love to hear from you

Is minic a bhris béal duine a shrón.
Many a time a man's mouth broke his nose. (Your mouth can get you into a lot of trouble.)
*****

Cuir síoda ar ghabhar ach is gabhar i gcónaí é.
Dress a goat in silk and he still remains a goat. (You can dress things up or use nice language about something but it doesn't hide the reality.)
*****

Is minic a ghearr teanga duine a scornach.
It is often a person's tongue cut his throat. (What you say can get you into a lot of trouble.)
*****

Nuair a bhíonn an cat amuigh, bíonn an luch ag rince.
When the cat is outside, the mouse does be dancing. = When the cat's away, the mice will play.
*****

Bíonn gach duine go lách go dtéann bó ina gharraí.
Everybody is good natured until a cow goes into his garden. (Everybody is unconcerned about a matter until they're affected by it personally)
*****

Inis do Mháire i gcógar é, is inseoidh Máire dó phóbal é.
Tell it to Mary in a whisper, and Mary will tell it to the parish. (Women like to gossip)
*****

Is teann gach madra gearr i ndoras a thí féin.
Every terrier is bold in the door of its house. (People can be full of brave talk when near home but not so confident when out of their comfort zone)
***** 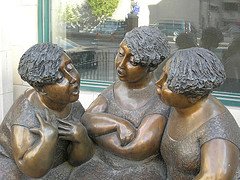 An té is mó a osclaíonn a bhéal is é is lú a osclaíonn a sparán.
The one who opens his mouth the most, it is he who opens his purse the least. (Often used in a pub setting for someone who is talking a lot and not buying their round of drinks- a mortal sin in Ireland!)
*****

Níl aon tóin tinn mar do thóin tinn féin.
There's no sore ass like your own sore ass. (This funny saying is really a word play on the famous irish saying 'Níl aon tinteán mar do thinteán féin.' which means 'There's no place like home.'')
*****

Muna bhfuil agat ach pocán gabhair, bí i lár an aonaigh leis.
If you only have a buck-goat, be in the middle of the fair with it.  (Whatever talents/assets you have, use them)
*****

Ná feic a bhfeicir, Is ná clois a gcloisir
Is má fiafraítear díot, Abair ná feadrais
Don't see what you see, Don't hear what you hear
And if you're asked, Say you don't know
(means 'Whatever you say, say nothing!')
*****

Is minic a bheir dall ar ghiorria
It is often a blind person caught a hare (If something's bragging about something, this is a funny Irish saying or put down along the lines of 'So what's the big deal?)
*****

Is fearr marcaíocht ar ghabhair ná siúlóid, dá fheabhas
A ride, even on a goat, is better by far than having to walk.
*****

An t-uan ag múineadh méilí dá mháthair.
The lamb teaching its mother how to bleat (A put down for an uppity child or a bullied parent)
*****

Go gcoinní Dia i mbois a láimhe thú, agus nár dhúna sé a dhorn go teann choíche.
May the Lord keep you in his hand and never close his fist too tight.
*****

Ar mhaithe leis féin a níos an cat crónán.
The cat purrs to please itself.
*****

Galar gan náire an tart.
Thirst is a shameless disease. (When you're in need of a drink.)
*****

Is fearr a bheith díomhaoin ná droch-ghnóthach.
Better to be idle than up to no good (When apologizing for doing nothing)
*****

Is geal leis an bhfiach dubh a ghearrcach féin.
The black raven thinks its own offspring is bright. (This funny Irish saying is a good put down for a woman bragging about her children)
*****

Ná nocht d'fhiacla go bhféadair an greim do bhreith.
Don't bare your teeth until you can bite. (Don't threaten if you can't follow through.)
*****

Is maith an t-iománaí an té a bhíonn ar an gclaí.
The hurler on the ditch is a great fellow. ( A put-down for the armchair expert)
*****

Nuair a bheidh do lámh i mbéal na con tarraing go réidh í.
When your hand is in the hound's mouth withdraw it gently. (Be careful when dealing with somebody powerful)
*****

Baineann an druncaeir an díon dá thigh féin agus cuireann ar thigh an tábhairne é.
The drunkard takes the roof from his own house and puts it on the publican's house.(This funny Irish saying is a good way of saying that the drunkard ends up giving everything to the pub owner.)
*****

Go n-ithe an cat thú is go n-ithe an diabhal an cat.
May the cat eat you and the devil eat the cat. (More of a curse than anything)
*****

Seachain tigh an tabhairne nó is bairnigh is beatha duit
Beware of the drinking house or you'll be living on barnacles. (If you spend all the time in the pub, you will be penniless)
*****

The Irish are very fair people; they never speak well for one another.
*****

As you slide down the banister of life, may the splinters never point in the wrong direction.
*****

Pós bean ón sliabh agus pósfaidh tú an sliabh ar fad.
Marry a woman from the mountain and you will marry the entire mountain
*****

Trí ní is deacair a thuiscint;
intleacht na mban, obair na mbeach,
teacht agus imeacht na taoide.
Three things hardest to understand;
the intellect of women, the work of the bees,
the coming and going of the tide.
*****

Is maith an bhean í ach níor bhain sí a broga di go foill.
She is a good wife, but she has not taken off her shoes yet. (Remark about the new wife who hasn't 'proven' herself yet).
*****

Ní féasta go rósta, ní céasadh go pósta
There is no feast without a roast, there is no torment without being married. (Being married is not always easy)
*****

Is folamh fuar é teach gan bean.
A house without a woman is empty and cold.
***** 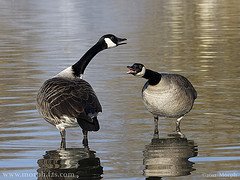 Is fearr an t-imreas ná an t-uaigneas.
Arguing is better than loneliness. (We'll put up with a lot to avoid being alone)
*****

Faigh do bhean i gcóngar, ach i bhfad uait díol do bhó
Get your wife locally, but far from you sell your cow. (When you get a wife, better to know her well, but if you're selling a cow do it at a distance so there's no come back)
*****

Faigheann an tseanbhróg an tseanstoca.
The old shoe gets the old stocking. (For everyone there's someone out there.)
*****

You will find many funny Irish toasts on our Irish drinking toasts and Irish Birthday Toasts pages.

And we have lots of other great Irish proverbs on our Famous Irish Sayings, our Irish Love Sayings and Gaelic Sayings pages which really must have a look at, plenty for any occasion.

Visit our Irish Love Poems and Irish Wedding Poems pages for poetry, verse and songs of love, many translated from Gaelic.

Checkout our Irish curses page for some other funny sayings.