These Flann O Brien quotes will give you some feel for particular wit of the man.

Born Brian O Nolan, Flann O Brien grew up in a Gaelic speaking family and wrote in both English and Gaelic. He wrote under a number of names including the well-known Myles na gCopaleen.

O Brien was an Irish civil servant who wrote under a pen name to avoid running into trouble with his employers. He is now seen as one of the key figures in postmodern literature. However, during his lifetime, his books did not receive widespread recognition although Graham Greene was a fan.

It was common knowledge around Dublin who O Brien was, despite the pseudonym. He got into trouble at work for making fun of the civil service and making political comments. He was practically obliged to retire at the age of 42. Like Brendan Behan, O Brien was a literary alcoholic who died aged 54.

Two of his novels At Swim-Two-Birds and The Third Policeman are now considered major works in English-language fiction.

As it happens 2011 marks 100 years since O Brien's birth and there are a number of celebrations being planned in Dublin. What will be most exciting is a planned movie adaptation of At Swim-Two-Birds with well known Irish actors Brendan Gleeson, Colin Farrell, Cillian Murphy and Gabriel Byrne all connected with the film.

"A pint of plain is your only man" is one of the best known Flann O Brien quotes from the poem of that name. You'll still hear it said in pubs around Dublin at the sight of a creamy pint of Guinness. 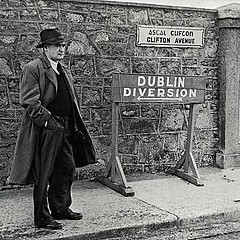 "I am completely half afraid to think"

When things go wrong and will not come right,
Though you do the best you can,
When life looks black as the hour of night -
A pint of plain is your only man.
****

“Your talk," I said, "is surely the handiwork of wisdom because not one word of it do I understand."
****

Anybody who has the courage to raise his eyes and look sanely at the awful human condition ... must realize finally that tiny periods of temporary release from intolerable suffering is the most that any individual has the right to expect.
****

I am completely half afraid to think.
****

Moderation, we find, is an extremely difficult thing to get in this country.
****

In Boston he met a pretty lady, fat and forty, but beautiful with the bloom of cash and collateral.
****

The majority of the members of the Irish parliament are professional politicians, in the sense that otherwise they would not be given jobs minding mice at crossroads.
****