If you want to know what the most popular Irish Gaelic boys names are right now, then let's help out with an up-to-date list. Every year Ireland's Central Statistics Office (CSO) produces a report on the top 100 Irish and Gaelic baby boys and girls names that people chose for their babies in the previous year.

They produce a top male and female favorite 100 Irish names as it were.

In the list below, I have excluded many of the common Irish baby names such as Jack, Evan and Ben as these could be considered universal. However, a third from the 2009 list of names are traditional Gaelic names or have a very strong Irish association. If you have the difficult task of choosing from long lists of baby names, then this list of the top 30 Irish and Gaelic names might be just what you are looking for.

I also include the pronunciation and meaning of the name though I accept that these explanations can often be disputed. If you think I've got it wrong or want to offer an alternative meaning to those below, make sure to contact me. For good measure, we also include information on some famous Scottish or Irish people who bear these Irish and Gaelic boys names.

Irish form of John which is itself of Latin/Greek/Hebrew origin meaning "God's gracious gift." Shawn or Shane are versions of the same name. Seán Connery, the famous Scottish actor bears the name.

Seán Connery and his wife-photo courtesy of Alan Light.

Derived from the Irish name Conchobhar, it means 'lover of hounds or dogs.' It was a popular name among Irish kings, most noteworthy of whom was Conchobhar MacNessa, legendary king of Ulster, famous for his tragic passion for Deirdre.

Really of Biblical and not Gaelic origin, its association with Ireland is so strong that in parts of the world Irish people are referred to generically and sometimes disparagingly as 'Mick', the contracted form of Michael. This name means 'Who is like God?' The Gaelic form of the name is Micheál.

This Gaelic boy's name means lasting or ancient. Cian was the name of a son-in-law of Brian Boru, last High King of Ireland. Both were killed at the legendary battle of Clontarf in 1014 fighting the Vikings.

This Gaelic boy's name also exists as Daire and Dara. It comes from Irish meaning "oak tree". It is also the name of a 6th-century saint from Connemara. It is occasionally used for girls.

This name is the popular Irish form of William, which itself comes from Willahelm, a Germanic name meaning which implies "strong protector." The actor Liam Neeson bears the name 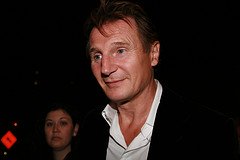 Liam Neeson, a principal actor in Star Wars, Schlindler's List and Michael Collins among many other movies -photo courtesy of Karen in Toronto

A Gaelic name which means "little deer", Os is a Gaelic word for deer and -ín at the end of a word means small. In Irish legend, Oisín was a warrior hero and a poet, the son of Fionn Mac Cumhail, the leader of the famous band of warriors called the Fianna. Oisín is famous for his love of golden haired Niamh with whom he spent over 300 years in Tír na nÓg (Land of Eternal Youth)

The most well known name of Ireland is actually of Latin origin, meaning "born to nobility". St Patrick was the patron saint of Ireland who is responsible for making the shamrock such a well-known Irish symbol. Patrick and the Gaelic forms of Pádraig and Pádraic are very popular names in Ireland. Pádraig Harrington, the British Open Golf winner, bears the name. 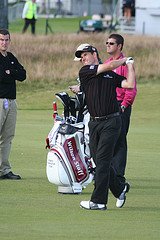 Twice British Open and PGA Championship Winner, the likeable Pádraig Harrington is popular both at home in Ireland and abroad-photo courtesy of SN#1

Eoin, and Seán are Gaelic baby names for John. See notes on Seán. 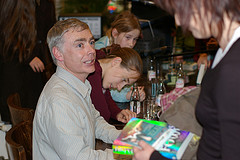 Considered Ireland's 'J. K Rowling', Eoin Colfer is the writer of the Artemis Fowl series of books. In 2008, Colfer was signed up to write the sixth installment of the Hitchhiker's Guide to the Galaxy series. -photo courtesy of Steffenz

This Gaelic boy's name probably comes from the Irish word cill meaning church, combined with a diminutive suffix to denote small. It was the name 7th century Irish saint who established a mission in Germany and became Bishop of Wurzburg. He was later beheaded. The actor Cillian Murphy bears the name. Murphy is a rising star who has won the Palme D'or at Cannes for his role in the film The Wind that shakes the Barley. He is quite private and does not court the limelight. His bright blue eyes are often commented on 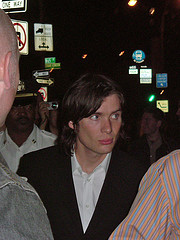 Cillian Murphy is a rising star who has won the Palme D'or at Cannes for his role in the film The Wind that Shakes the Barley and has starred in a number of other movies inlcuding Batman begins, Inception and 28 Days Later. His distinctive blue eyes are often commented on-photo courtesy of Mirka23

A favorite Gaelic boys name. Means 'fair-headed.' Gruaig fionn in Gaelic means 'blonde hair'. Fionn Mac Cumhail (Mac Cool) was the leader of the legendary warrior band, the Fianna, who enjoyed superhero status in Irish mythology. Fionn's qualities were many. He was strong, brave, kind, good-looking and wise. The stories about him are many, one of which tells how he became wise by touching the 'Salmon of Knowledge (an bradán feasa) with his thumb and then putting it in his mouth. His son was Oisín. A variation on Fionn is Finn (pronounced Fin).

Ronan is the anglicised version of the Gaelic boy's name, Rónán, which is made up of the Gaelic word rón and its diminuitive suffix. A legend exists of a baby seal who strays too close to the land, is swept ashore by an enormous wave and becomes trapped in a human form as a young maid. She marries a farmer has several 'little rónáns' but never loses her desire to be at sea. Eventually she returns to the ocean but stays close to the coast to be near her family and to make sure they are safe. The pop singer Ronan Keating bears the name. 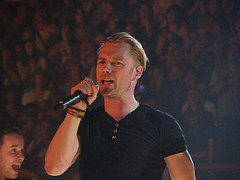 Ronan Patrick Keating is a singer-songwriter and musician who rose to fame with the boy group Boyzone. He has made 7 albums during his solo career, selling well over 20 million albums. Best known for the song "When You Say Nothing at All" which featured in the movie, Notting Hill. -photo courtesy of vagueonthehow

Eoghan (or Eogán) is also a really old Irish name meaning 'bred from the yew (Eo) tree' and suggests magic powers. Was a popular name in Ancient Ireland.

The name has been anglicised as Eugene or Gene

Of Gaelic origin, this Gaelic boys name means poet or philosopher. It was also the name of a 11th Century King of Connaught in the West of Ireland.

Anglicized version of Aodhán or Aedan, this Gaelic name means "fire". Saint Aidan of Ireland in the seventh century established the monastery of Lindisfarne (in Scotland).

This Gaelic boy's name is derived from the Irish word cath meaning 'battle' but implying 'strong in battle'. It is also the name of a 7th Century saint.

Kevin is the Anglicized form of the Irish Gaelic name Caoimhín meaning attractive, gentle and kind. One of Ireland's best known saints, Saint Kevin established a still much visited monastery in Glendalough, Co Wicklow, Ireland. It has become a very popular name in many countries.

The name Rory combines two Gaelic words, ruadh meaning red with rí meaning king. This was the name of the last high king of Ireland, reigning in the 12th century.Ruairí is the common Gaelic form of the name.

This is a diminuitive of the name Ciar. Ciarán means little dark one. Two Irish saints bear that name, Ciarán founder of the famous Clonmacnoise monastery and Ciarán the Elder, patron of the kingdom of Munster (south of Ireland).The Anglicized form of the name is Kieran.

The Gaelic name Oscar means 'deer lover' Oscar was a grandson of the wise warrior leader of the Fianna, Fionn mac Cumhail. Oscar Wilde, the controversial Irish playwright and artist, bears the name 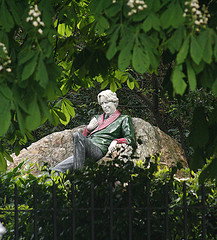 "Always forgive your enemies; nothing annoys them so much." Just one of thousands of memorable Oscar Wilde Quotes. This picture is of a statue erected to him just opposite where he lived in Dublin's Merrion Square-photo courtesy of boocal

It's hard to pinpoint where this Gaelic name comes from- may mean a cloud (??) or a champion. It was the name of a legendary Irish king called 'Niall of the Nine Hostages'. It has become popular far beyond Ireland, particularly in the version Neil e.g Neil Armstrong, Neil Young.

Also exists as Oran, this increasingly popular Irish name means dark or black- haired. There have been a number of saints with this name including one of the 12 close followers of St Columba who set up the scholarly monastery at Iona.

This old Irish name also exists as Seanán and means wise and old. Saint Seanán was a 6th century monk in the South of Ireland.

Hugh is used in Ireland as the Anglicized version of Aodh which means 'fire'. Red Hugh O' Donnell of Tyrconnell (Donegal) and Hugh O' Neill, Earl of Tyrone, together lead a rebellion and fought with considerable success against the armies of English Queen Elizabeth I. They were eventually defeated at the Battle of Kinsale in Co. Cork in 1601 and fled the country for Europe in what was known as 'The Flight of the Earls'.

The Irish Gaelic name means silent or fierce or brave one. Lorcan was the grandfather of Brian Boru, last High King of Ireland.

Shay is usually used as a shortened version of the Irish name Séamus which itself is a Gaelic version of James.

This Gaelic boys name is derived from the Latin name Columba which means dove. Other variations of the name include Callum or Colom or Colmcille. Born in the 6th centure, St Columba founded the famous monastery in Iona among a number of others. Considered a great scholar and poet, his monks were responsible for producing the wonderful Book of Kells to which he may have contributed personally. 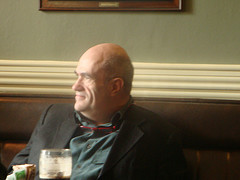 Colm Toibín is a novelist and critic from County Wexford who has won the Booker Prize (1999) among a list of other literary awards. His novels include The Heather Blazing, The Story of the Night and The Master -photo courtesy of omaniblog

Don't just look at the current list of gaelic names when choosing your baby's name. Take a look at the favorite and classic Gaelic Names list also.

If you want to see the full list of Irish and Gaelic boys names, here is the CSO report.