Just what are most popular Irish Gaelic girls names right now? Which female Gaelic names are in fashion at the moment? Who's counting? Well, Ireland's Central Statistics Office (CSO) does a really good job and produces an annual report on the top 100 Irish baby girls and boys names that people chose for their babies.

They produce a top male and female favorite 100 Irish names as it were.

Irish people have become quite adventurous when choosing baby names, but especially girls names. This could be because modern Ireland is far more cosmopolitan with a larger International community. From the CSO list of 100 most popular girls' names, I have excluded 'international' names such as Isabel, Amber, Layla and Zara and other universal names such as Clara, Daisy and Jennifer. However, over a quarter of the more popular Irish girls names are traditional Gaelic names or have a very strong Irish association. These are the ones included below.

If you're head is spinning from the difficult task of sifting through long lists of baby names, then this list of the top Irish and Gaelic girls names might be just what you are looking for.

As with the list of Gaelic boys names, I also included the pronunciation and meaning of each of the names below. However, I accept that these explanations can often be disputed. If you think I've got it wrong or want to offer an alternative meaning to those below, make sure to contact me. For good measure, I also include information on a few famous Irish people who bear these Irish and Gaelic girls names.

Like the name Aoibheann, Aoife is a Gaelic girl's name which means beautiful. In Irish mythology Aoife was a warrior princess who fought and lost against the legendary Cúchulainn with whom she later became romantically entwined.

This Gaelic name comes from the word ciar meaning dark. The popular boy's name Ciarán comes from the same root. Saint Ciara was an Irish nun who established a monastery in County Tipperary in the 7th Century.

This Gaelic girl's name means gentle, mild or precious. It actually comes from the same root as Kevin.

This popular Gaelic Irish name means brightness or radiant beauty. Niamh was the daughter of Manannan, a sea god in Irish mythology. Niamh was known for her bright golden hair and her striking white horse. She fell in love with Oisín, the son of Fionn, the leader of the great warrior band called the Fianna. Together with Oisín, they ran off to Tir-na-nÓg (Land of Eternal youth) for 300 years. 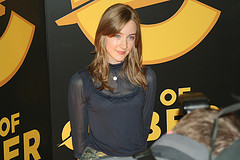 Born in 1994, Saoirse Ronan played a star role in the 2007 movie Atonenment and won an Academy award for Best Supporting Actress. Has since been in several other Hollywood films including the 2010 epic The Way Back -photo courtesy of bubbleleh

This is an Irish diminutive of the popular name MARY which has been used for hundreds of years. One of the principal characters in James Joyce' novel Ulysses was Molly Bloom. De Danann, an Irish traditional group had a big hit with the song My Irish Molly in the 1980's.

This Gaelic girls name means little rose and it has been used in Ireland for centuries. For a period in Ireland's history patriotic Irish poetry was forbidden and poets disguised their patriotic sentiments in the form of love poems and songs for Róisín Dubh (Dark Rosaleen). 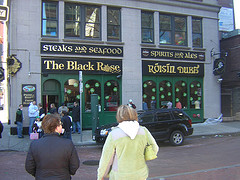 Róisín Dubh-The Black Rose pub and restaurant in Boston. A popular spot and a name of historical significance-photo courtesy of reynold.james.e

Though often considered an Irish name, this name is actually from another Celtic country, Wales. It is a shortened version of the name Margaret.

This popular Irish name comes from the name of the river Clody whose source is in County Tipperary. The river itself gets its name from that of a local female God.

Erin is an anglicized version of the words Éirinn or Éire. Erin is the female personification of Ireland. For many years Erin was a popular name among the Irish diaspora, in the US in particular, but it has now also become a very popular name at home in Ireland.

The female Gaelic name Aisling or Ashling means a vision or a dream. Aisling poetry in the 17th and 18th century personified Ireland as a beautiful woman in danger and imagined a better future for her.

Often used as a translation for Anne, the Gaelic name Áine means cheerfulness or happiness. Áine was one of the wives of Fionn Mac Cumhail, leader of the legendary Fianna warrior band. She is associated with prosperity and being lucky in love.

This Gaelic girls name means pure and is of French and Greek origin. It comes from the old French name Katherine which itself is derived from the Greek name Aikaterine. Traditionally the name was pronounced Kat-leen or Kath-leen but its pronunciation as Kate-lin has become increasingly popular in Ireland.

This Gaelic name is a translation of English and Latin names, Eve and Eva respectively. Eve/Eva is derived form a Hebrew word meaning to breathe/to live. According to the Bible, Eve and Adam were the first humans beings. She tempted Adam with the forbidden fruit and they were thrown out of the Garden of Eden. In spite of that, it's still a very popular name!

This Gaelic name comes from the Irish word for friend. Indeed when writing a letter in Gaelic Irish, it is common still to begin with A chara which can be translated as 'Dear Friend'. The word cara itself is related to the Latin word caro which means dear/beloved.

While not a Gaelic name itself, this name has been such a popular Irish name, that it cannot be omitted from this list. The name is Latin in Origin meaning 'Star of the Sea'. The Virgin Mary was worshipped greatly in the Catholic Church and in Ireland in particular, devotion was enormous. A popular Gaelic form of the name is Máire pronounced Maw-reh.

Aoibhinn and Aoibheann are all derived from the word Aoibh meaning radiant beauty.

This Gaelic girls name also exists in its older form Órfhlaith or Orlaith and means golden princess. The Irish word for gold is ór and is of Latin Origin. One of the sisters of Brian Boru, the last High King of Ireland, bore the name. 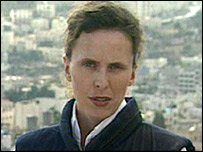 Orla Guerin is a well-known Dublin born news journalist with the BBC.

Eimear was in Irish folklore, in possession of the six gifts of womanhood-beauty, a gentle voice, kind words, wisdom, needlework and chastity. She was the wife of the great hero Cúchulainn who wasn't exactly loyal to her.

This common Gaelic name is a variant of the the names Janet or Jane which themselves come from the male name John. It means 'God is gracious'The singer Sinéad O Connor bears the name. 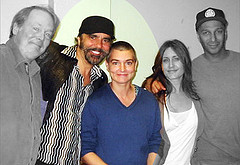 This Gaelic name also exists in the forms Maebh and Maedbh. It means the 'source of great joy' or 'she who entrances' She was the legendary warrior queen of Connacht (West of Ireland). She quarreled with her lover Ailill in the great story of An Táin Bó Cúalnge (The Cattle-Raid of Cooley) over who had the most possessions.

The river Shannon is Ireland's largest river and. The name comes from the word sean (pronounced shan) which means old or ancient and abhainn (pronounced ow-en) which means river. Like the name Erin, the name was more popular in the USA than in Ireland for years. However, both names are now popular both in Ireland and abroad.

Don't just look at the current list of gaelic names when choosing your baby's name. Take a look at the favorite and classic Gaelic Names list also.

If you want to see the full list of Irish and Gaelic boys names, here is the CSO report.